Recently The Artist's Path reprised SEVEN at Embry-Riddle Aeronautical University. Student Allison Cisneros wrote a fine piece on the production and I post it here for our wonderful cast, crew, audience and the seven women whose lives are chronicled by seven women American playwrights. 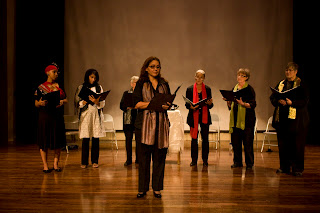 SEVEN Shows Struggle, Optimism
By: Allison Cisneros, Copy Editor
“SEVEN” is an amazing work of theatre, global relationships and justice. It began when Vital Voices Global Partnership paired seven recognized, strong women with seven playwrights. Women from countries such as Russia, Guatemala and Cambodia were interviewed and their words were combined into a script. “SEVEN” has been performed across the globe and was brought to the Embry-Riddle Aeronautical University Prescott campus on Oct. 20 in the Davis Learning Center.
The Artist’s Path is a non-profit organization that asks what artists can do to stimulate change in the world. One of the ways it explores the role of the artist in society is putting on plays such as “SEVEN.” Gail Mangham is the head of the project and enjoys bringing the Artist’s Path to ERAU.
“SEVEN” tells the stories of seven women who overcame horrible obstacles to become successful and work to positively change their world. For example, Marina Pisklakova-Parker was the first person to start a domestic violence hotline in Russia, a country where 14,000 women die each year from their husbands abusing them. She overcame the death of her biggest supporter, her husband, and death threats aimed at her son. However, her domestic violence hotline has grown out of her office and is now helping many women across Russia get the help they need.
Annabella de Leon is a Congresswoman in Guatemala who has had her life threatened in a corrupt system, but has been re-elected to continue her work. De Leon grew up very poor and witnessed another women throwing dirt in her family’s food. She decided she wanted to get her family out of the poverty of society that wears people down until they are so lost that they ruin the food for another family. De Leon went to school where she was told to leave because she wasn’t rich, but she stayed. She persevered to become a trusted Congresswoman of Guatemala.
The stories share the same pattern. Each woman was living the status quo until an irreversible change made them rise to the challenge of social, positive change. These changes included watching a mother lie to her husband’s new wife, witnessing a woman dying in childbirth, gang rape, and being beaten with clubs as people laugh. It’s astounding how much horror these selected women had thrown into their lives to emerge as leaders of their community.
The women persevered because they believed they were doing the right thing. Their goals were recognized as positive such as providing health care to women in Afghanistan. They received support because their change was necessary and all the community needed was a leader.
None of the women believed they could create such a substantial change until they began to move out of the horrible events of their lives.
Rexanne Bell, who plays Inez McCormack, says “It doesn’t get easier to hear.” Reynessa Sanchez, who plays Hafsat Abiola, states “Listening to these women, it feels like no matter what, you can get up and do anything.” Maria Forte, who plays Mukhtar Mai, says it isn’t about a “happy, cookie-cutter ending.” The actresses agreed on the fact that these women survived such horrors and feeling so empowered is the most humbling aspect of all.
“SEVEN” was given a standing ovation and deserves a far larger audience than it received. “SEVEN” is an amazing story of strength, determination in the face of discrimination, and women who create positive change. It is a play of darkness and light, terrifying events and positive people.
Posted by Gail Mangham at 3:07 PM No comments: