On August 30, 1944 Molly Ivins came into this world, no doubt shouting her dismay at the manner of her entrance.  Although no longer with us, she left a legacy of exhortations to all of us to get up off our butts, make some noise, make a difference and have some fun along the way.

Molly and I grew up in the same city, Houston, Texas.  She was born two and a half months before I was.  I often wonder when our paths might have crossed.  Certainly not at Smith College.  My undergraduate years were spent at UT Austin.  Certainly not in Paris.  I could ill afford any semester abroad program.  I spent my summers working at a paint company to earn enough money for college expenses in the coming year.  Certainly not at Columbia University.  My graduate degree is from the University of Oklahoma.  Molly came from privilege, going to St John’s School located in a wealthy enclave of Houston; I attended Galena Park High School located within shouting distance of the highly industrialized, polluted ship channel where I held my breath on the school bus each morning as we passed a petro chemical plant.

But at some point Molly fled her roots, at least those anchored in privilege, and began to focus her sharp edged wit and intelligence on the world beyond the walls of wealth.

It was at The Texas Observer that she honed to a razor’s edge her ability to cut through the bullshit and deliver an incisive shot that would puncture the inflated ego of some political operator or cast a laser beam on an inane argument, shattering it into shards of fragmented nonsense.

It was last autumn while visiting family in Texas that my cousin gave me two of her books to read.  Next I came across the play Red Hot Patriot, ordered it, devoured it and decided it was the perfect centerpiece for The Path 2014 Festival, The Artist’s Response to the Changing Landscape of Journalism & Ethics through Theatre, Film & Photography. On youtube I listened  to a speech she gave at Tulane University and found her not only funny and acerbic but also compassionate and insightful.  It was that speech that convinced me to take on ‘Patriot’ and play a fellow Houstonian even if we grew up in very different universes.

But The Artist’s Path attempts each year a bit more than just producing a play.  My own roots in education both secondary and higher push me to offer something more substantive.  Don’t get me wrong, Red Hot Patriot is a wonderful piece and I look forward to playing Molly, but I also want to offer more.

Molly Ivins made her bones in the domestic politics of Texas.  She did not report from foreign lands, but from littered offices in Houston, Austin, Dallas, Ft Worth and her own home not to mention the hallowed halls of the New York Times. But I believe she would have honored those who travel to distant shores to bring us the news-- news which eventually impacts us in whatever large or small community we call home here in America.

And so Path will honor those journalists who have lost their lives while doing their jobs.  Over 900 reporters have been killed worldwide since 1992. In honor of them and of Molly, we will hold a Roll Call in Remembrance in conjunction with a Symposium on the Changing Landscape of Journalism and Ethics in the 21st Century.

Molly’s biting commentary notwithstanding, she believed in digging out the truth and telling it.  She skewered the powerful in defense of the powerless.  In her final months of life as she battled cancer, she also battled what she saw clearly as the trampling of the Bill of Rights, co-authoring with Lou Dubois, The Bill of Wrongs. 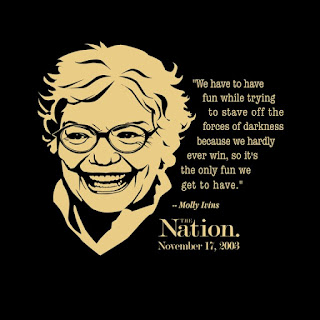 In early January 2007 during a rare ice storm, Molly asked to be driven to a fundraiser to thank supporters of The Texas Observer. On January 31, 2007 she passed away. 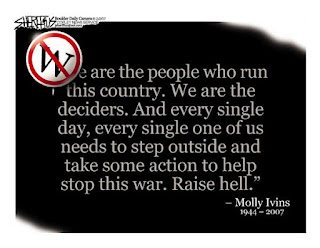 Posted by Gail Mangham at 4:02 PM No comments:

Path 2012 Ends with Applause for Love!


Our Second Annual Path Festival is past.  It seems only yesterday that I awoke in the middle of the night with the phrase The Artist's Path ringing in my head, but it was May 2009 and here we are fast approaching May 2012.  They say if you surround yourself with good people, you will achieve success.  This was certainly the case with Love Makes the World Go Round.

The event's inception came out of my notion that I should do something light in order to have a contrast with the peace and social justice theme of 2011.  When I put out the call for Monologues, I really had no idea what to expect.  And really-- the show was always at the mercy of the submissions.  I received over four dozen pieces from California, Arizona, New Mexico, and Texas.  While they were all interesting, 14 rose to the top and together created a performance piece that gave us fourteen windows into each playwright's vision of love.  Many of the pieces dealt with loss or impending loss, expressed in strong dramatic terms because of the love that was part and parcel of the relationship. One monologue explored how a life off the rails can lead one to a very unhealthy relationship with food-- a relationship that at first looks like love, but is really a twisted version of it. In another piece a young pregnant widow of a soldier who died in Iraq discovers love from an unexpected quarter...her father-in-law.  One of the funniest moments happened when a mother tries answering the question What is Sex?

In the end the pieces gave us, performers and patrons alike, a roller coaster ride as we laughed and cried our way through two hours.  Some monologues had layers upon layers of meaning yet to be plumbed.   Each piece was gift to all of us and I thank all the playwrights.

Love Makes the World Go Round turned out to be one of the most collaborative experiences I've had.  I was blessed to have four playwrights see the show; indeed two of them also performed.The project also integrated two Phoenix based actors giving us an opportunity to work with new talent in our area and creating connections between Prescott and the Valley.

The final piece of the evening was a gracious bow to Elisabeth Barrett Browning  who inspired me over 50 years ago when my husband passed a note to me in junior English on which was written her Go From Me sonnet.

But now it is time to let go gently of this wonderful experience and move on to the challenge of  Path 2013, The Artist's Response to the Body Politic.  In Prescott this project may well get me tarred, feathered, and ridden out of town on a rail.  And so it goes...
Posted by Gail Mangham at 10:19 PM No comments:

Come in Out of the Cold and Celebrate the Arts

I’m not a cold natured individual, but I do have my limits.  Yesterday I did something I haven’t done in a long while.  I auditioned for a play going up this summer, Fred & Mary, An Unconventional Romance by Micki Shelton (Visit www.ElksOperaHouseFoundation.org.).  Shivering in the 58-60 degree, dark Pueblo

of the Smoki Museum in Prescott (Do visit this wonderful museum), I handed over my headshot (printed hastily on my home printer from picture taken in 2006), resume, and performed my two contrasting contemporary pieces.  All so familiar and yet not.
For so many years I’ve initiated my own opportunities for creating art through theater, auditioning myself or being asked to do a project.  It was…well…it was fun to be required to go through these old, familiar routines, to see old friends, meet new members of our growing theater community.  I even wrote my own pieces, moving well outside my comfort zone, but relishing the challenge of venturing into the writing side of theatre.
Prescott, for all its small town community feel and often conservative outlook, has a growing arts world that continually expands in sheer numbers, quality, variety, and willingness to move outside its own comfort zone.  It’s a slow process that began over a hundred years ago when locals created theatre on the grounds of Ft. Whipple and made music on Whiskey Row and in their homes.
On March 10th for the second year, under the founding and creative direction of Andrew Johnson-Schmit, our artists of all stripes will come together at the Elks Opera House and celebrate the arts through the Second Annual Buckey Awards For Excellence in the Arts. It’s a time to honor those who’ve been laboring in the fields for decades, those who arrived a short time ago adding their efforts to the creative cauldron and everyone in between.
Even if you do not define yourself as an artist, come meet all those who are either lauded or labor in obscurity, but who understand the value of just showing up for fellow artists.  Come in out of the cold of a Saturday evening in March into the warmth of the Elks Opera House.     Tickets on sale at www.ElksOperaHouse.com,  box office open Tues-Fri, 10 to 2 or call 928 777 1370 .
Gail Mangham,  Founder & Artistic Director of The Artist’s Path, wwwTheArtistsPath.org
Second Annual Artist's Path Festival, Love Makes the World Go Round, April 14, 15, 21, 22 at 'Tis Arts Center in Prescott