The Power of Sand Animation from The Ukraine

Mykhailivskyy was famous for its priceless mosaics.

Some have been preserved in nearby Sofiyivskyy Sobor.

Please take a moment to watch this video from youtube.  I believe it illustrates so beautifully the theme of The Artist's Path in 2011--The Artist's Response to Conflict and Social Crisis.  Let me know your thoughts...

The "Choose the Theme Music" for The Artist's Path's first event is up on the web site.  Just go to http://www.theartistspath.org/  and Donate $10 and send your suggestion in.  Next September 11, 2010 the Board will choose the suggestion they like best, and that person will win 4 passes.  We don't know yet what the ticket prices will be but probably $30 to $40; so this is a good deal. Now then tell us what you want to hear for theme music for The Playwright's Response to Conflict and Social Crisis.
Posted by Gail Mangham at 8:08 PM No comments:

The Power of Music

I've been thinking of a holding a contest to select a theme song for our inaugural event in 2011--The Artist's Path through Conflict and Social Crisis and found this on youtube.

The Power of Art for the Individual & Society

I know the artist can institute change in both the individual and society. In terms of the individual, my sister had lymphoma, a terminal cancer disease for six years. As you can imagine the treatments, chemo, radiation, etc, were awful and debilitating. Sometimes I wondered if the treatment was worse than the disease. But my sister continued to live her life and she decided to take acting classes being taught up in Westchester County by an actress (I later took lessons from her) and although these did not prolong her life,they enabled her to confront each day with more optimism. I attended some of the classes and I saw a side of my sister that I never knew before, even doing improvs.These acting classes enabled her to find some joy in her last year.

As for changing society, some artists moved from their art to political activities, expressing themselves against a particular regime or against war or the A-bomb or some other cause. I think of Picasso's La Guernica, a wall mural that spoke out against the Franco bombing of civilians during the Spanish Civil War. It is interesting that after the war, Franco built a monument to his forces but excluded those of the Republic even though the latter was the elected government. Closer to home, artists joined and contributed their art to the civil rights movement and to the anti-Vietnam War movement. Art is a wonderful tool to express protest and to advocate political and social change. Karin says that art talks to the soul of mankind. That may be and we may appreciate it for its beauty, but it also has political and social power as well.

Finally, in my own case, I was stuck in an unhappy professional situation that, for various reasons, I could not escape. In fact, my work was making me sick. My doctor suggested therapy but when I called the local shrink and discovered he would charge $75 an hour, I decided to return to acting and began auditions for the local community theater. So in my case, acting was a form of therapy that enabled me to survive some hard academic years. Of course, it is always risky to try and identify one variable as the defining factor in a life/societal change. And while these incidents are largely anecdotal, the lack of empirical evidence does not negate their veracity.

The Power of Sculpture 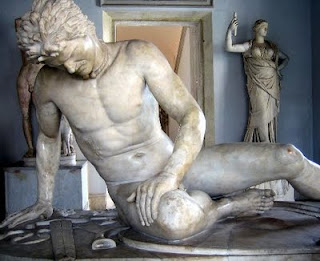 Not long ago I sent out an email to over 200 people asking them to respond to the question: Has a piece of art ever changed you in what you feel is a significant fashion? This is my response as promised.


In the fall of 1980 I was studying theater at the University of Texas in Austin. One day when I had a bit of time I wandered into the art building. In the center of a spacious, starkly white room was a quite large plaster copy of an ancient roman sculpture which is itself a copy in marble of an early Hellenistic piece from 220-230 B.C. thought to be done in bronze and lost in time and space. Of course I did not know all this then. At first I thought it was a rather smooth, white nude of a man reclining; but I found myself drawn to something about it.


It was early afternoon and I was quite alone in this vast space. About 15’ from the piece was a bench. Sitting I studied the figure. Here was a man, a warrior mortally wounded, his sword dropped at his side as he struggles to rise against the pain of the fatal wound in his side. I sat motionless taking in every detail until a moment came when I imagined that I could see movement—the right hand pressing down for support, the left leg drawing up to gain a footing on the shield on which he has collapsed, his face a mask of concentration and refusal to give in to the pain, the knowledge of imminent death.


The illusion was so real I rose from the bench feeling a strange desire to reach out and help him. Tears slipped down my face and more so when I finally saw the title of the piece, A Dying Gaul. He would never rise. But the artist had caught him forever on the razor edge countless soldiers over eons have found themselves—between death and the urge to heed the call of duty and honor.


Never again would I listen to a report of bombs exploding and statistics of the wounded and the dead as if such events were not a part of my world. They may wear Kevlar and desert fatigues, drive humvees instead of walk or ride horses, but they are the Dying Gaul who in his nudity seems to stand for every man who has walked a battlefield, whether in ancient Greece, on the steppes of the vast plains of Russia, the frozen forests of Europe, the rolling depths of oceans and the vastness of the skies, the jungles of Vietnam or the desolate wastes and urban horrors of Iraq and Afghanistan.


He is my husband, my son, my brother, my father, my friend and now my sister. I must rise and give succor and seek ways to ensure not only that he comes home to me, but that I build a world in which she never has to leave.  Gail Mangham


Won't you send to gailm@theartistpath.org your life changing experiences with art and your notions on the function of the artist in society?  I will post them to this blog.
Posted by Gail Mangham at 1:58 PM No comments:

The Artist and The Spirit 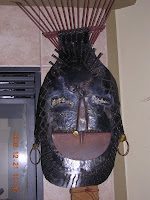 I believe that art helps raise awareness to both beauty, ugliness, tragedy and triumph in the world, touching each individual differently but moving people through their emotional response. When I watch a film or documentary, hear a poem, look at a picture or sculpture, hear a song, experience a dance, I am moved to take action. Much of my life has been manifested from my spiritual connection to an art form. I actually became an "artist" because I saw a sculpture of an Indian on bended knee bleeding into a pool (water sculpture). I wanted it so badly I could taste it, it was $40K, so I said to myself "I'll learn to do this myself..." Haven't quite gotten there, but I'm in my fourth year of sculpture welding.


Working with metal is an amazing experience. The metal tells you what it wants to be when you add heat to it. You have to listen to the metal and allow, really a metaphor for life, it too tells you what you need to hear, do and be. I remind myself all the time to LISTEN.


Artists bring pleasure, visceral experience, and spiritual meaning to people's lives. They educate, emulate life, and inspire. It is the duty of the artist to create with these concepts in mind and be genuine in all their endeavors.

I knew I liked to create, I just didn't realize how artistic I really was: I wrote a book and I write poetry; I am a motivational speaker; I had a radio show; I draw and paint; I work with wood; I do glass casting; I sculpt with clay and plaster; I am a metal sculptor. I also bake and sew. I don't feel like any medium is outside my range of interest. I started to be a serious artist (claimed it) recently (when I moved into semi-retirement). Up until then, I was just "experimenting." I feel it is my spiritual path. My artistic endeavor's are on my card, Muriel's Spirit Designs. MurielH@q.com
Posted by Gail Mangham at 9:59 AM 1 comment:

Welcome to The Artist's Path

In the summer of 2009 Gail Mangham founded The Artist's Path with the support of  Prescott College and Embry Riddle Aeronautical University in Prescott Arizona. Her years of acting, living abroad in the Middle East, and work with the many fine artists of the Prescott community inspired her to create an organization that would dedicate itself to artists, their old and new works, showcasing them in multiple venues. Moreover this venture will explore the role of the artist in society asking whether the artist can create substantive change and if so how it is effected.

Everyone is invited to ponder the following questions and if you wish to do so email your responses to gailm@theartistspath.org and she will post them to this blog.

• Do you believe that the artist can create change in an individual, in society both locally and globally? Describe how you came to believe that?
• Have you had a personal experience with an art form that you feel substantively changed you? If yes, would you please describe that experience?
• Have you thought about the function of the artist in society? Doctors heal; plumbers fix the toilet; teachers teach. What does the artist do? In a few words--given your experiences with art in its many forms-- what do you think is the function of the artist in society?
• If you are an artist looking at this, please describe Your Own Artist’s Path.
Posted by Gail Mangham at 12:11 PM No comments: